Hope Theisen-Claxton wanted to expose her high school English students to the greater classroom. Brad Thomas wanted those students to understand what it meant to depend on one another. This spring the two got together for a joint project between Metro East Lutheran High School – where Theisen-Claxton teaches – and Meridian Village Senior Living Community – where Thomas is Chaplain. 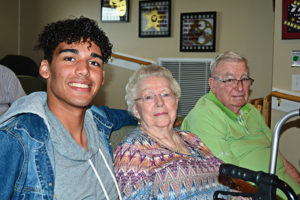 “Adopt-a-Grandparent” was the result of months of planning and matchmaking between students and would-be grandparents. This was the set-up: Students would spend a week with older adults at Meridian Village, interviewing them, videotaping them, and helping them with day-to-day living. Seniors would act as “hosts,” taking students around the community for scheduled meals and activities.

It was important to “Chaplain Brad”– as he’s known around Meridian Village – that Assisted Living residents participate in the program, because they actually had grandchildren the same ages as the students they’d be hosting. But it was also important, because students could learn the most about life from those in Assisted Living.

“Many of these residents are dealing with the ‘hard stuff’ in life,” says Chaplain Brad. “Some have memory loss. Some have hearing loss. Before the program began, I coached the students to allow for these age-related issues. I reminded them to speak slowly, to make eye contact, and to be considerate and attentive always.”

When the week finally arrived, the students were ready. But not as ready as their assigned grandparents, who showed up 45 minutes early for the initial meeting. Some had their hair and nails done for the occasion. Others tidied up their rooms. And then they went about the business of the week. 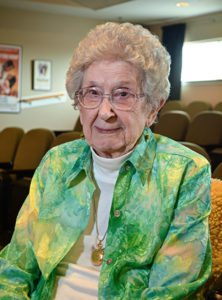 That “business” included an intergenerational water volleyball game, an impromptu piano-harmonica duet, and lunches in the dining room with envious fellow residents looking on. Throughout the week, there was a renewed interest in exercise class, as residents took their students down the hall for a workout.

“Sometimes we can’t anticipate how much others need us,” says Chaplain Brad. “But when we start caring for them, we see their need. We understand our role as caregivers in the family of God, and residents understand their role as care receivers.

Of course, it’s inevitable that people will grow more dependent on others as they age. But Chaplain Brad sees that as an opportunity for the younger care giver and older care receiver to participate in and experience the love of God, ultimately creating meaningful intergenerational bonds.

“Our culture doesn’t like to admit it,” he says, “but none of us are really in control. As Christians, however, we are assured that God is in control. And that we are wholly dependent on God.

“Assisted Living residents understand this. You can see their faith intact in the face of aging. As they begin to depend on others, they experience tangible evidence of God’s love. We can all learn from this.”