The piano at Richmond Terrace got a workout when Christian Frommelt visited. Playing rousing tunes such as “The Maple Leaf Rag” and “I Cover the Water” he not only entertained residents but brought back memories as residents tapped their toes and bobbed their heads to the music.

“This is taking me back to my dancehall days!” exclaimed one Richmond Terrace resident of the music Frommelt shared.

St. Louis has a strong dance and music tradition. Being in the middle of the country, dances from the big coastal cities worked their way inward and were revised in a St. Louis fashion. Frommelt, a local dance instructor, jazz pianist, and amateur historian, took Richmond Terrace residents on a trip back in time sharing the development of dances in St. Louis starting in the 1920s with the Lindy Hopp. 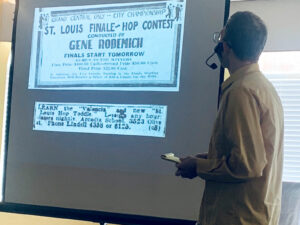 But Frommelt wasn’t the one doing all the talking. As the program moved into St. Louis dancehalls and local musicians, residents were happily reminiscing about the times they spent on the dancefloors across St. Louis. This interactive program is just one example of the many enriching activities provided by Richmond Terrace, a Lutheran Senior Services Assisted Living Community located in Richmond Heights, Missouri.

Frommelt, a St. Louis Shag aficionado who has been credited with reviving the nearly extinct dance, demonstrated the St. Louis Shag with the help of a Richmond Terrace staff member. The residents were thrilled to see the dance in person and hear about how this local dance has made its way across the world again.

As the conversation continued, residents swapped stories about time spent at The Riveria Club, on the S.S. Admiral, and, of course, Casa Loma. One resident talked about being a part of the Spot Rockettes, a St. Louis Dance Troupe that performed at many local venues. The residents dazzled Frommelt as they talked about the dancehalls that he has only seen in pictures providing new details and telling personal stories.

“Casa Loma has the best dance floor in the city,” added another resident.

The Casa Loma was the place to be. Several residents recalled dancing everything from the Jitterbug to the Waltz there, often dancing late into the night.

“It was fun; I miss those days,” concluded a resident.